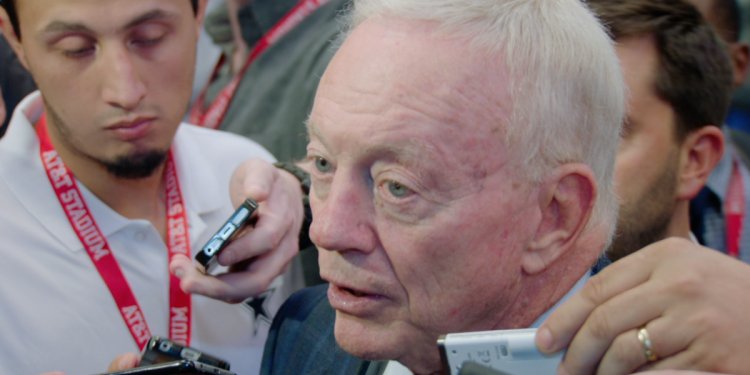 Dak Prescott might be playing like a veteran, but as if he needed reminding he’s still a rookie, Prescott held his own selfie stick as he did a national postgame interview outside the locker room.

It was another game, another big win for the quarterback, who now has five victories in six career starts.

“I think logic just tells you that as you see him have success, and you see him continue to [have success] against competition that I would basically say is getting better, ” Cowboys owner Jerry Jones said.

“…He’s really making great strides, and of course, for someone who for many years has been in these after-game situations where we didn’t know what we were going to do at quarterback and as late as probably training camp not know where we were going at quarterback after [Tony] Romo got hurt and to be sitting here with Dak playing at this level, and Tony getting better and better and better, I have to pinch myself.”

Prescott completed 18 of 27 passes for 247 yards with three touchdowns, an interception and a 117.4 passer rating, giving the Cowboys only their second victory ever at Lambeau Field.

We’re going to have a very, very, very good situation to make decisions around and nothing I’d rather do than go into the last half of the season with a ready to go Tony Romo and a winning Dak Prescott.

Prescott’s first career interception came on his 177th career attempt, setting an NFL record for the most pass attempts without a pick to start a career.

“I moved a little bit to my right, should have set my feet, kind of rolled, [Jason] Witten was turning in. I think he’s turning back, ” Prescott said of Morgan Burnett’s third-quarter pick. “It was bad on my part. Witten was doing the right thing. I just made a bad throw. It happens. Get that out the way now.

“…So start another one up.”

Prescott also fumbled twice, losing one. Not that it mattered.

In his pregame radio show, Jones said the Packers “have the advantage at quarterback. I’ll go on record and say it.” The owner gladly ate his words afterward.

Thus, it was the same question, different verse in the postgame locker room. What do the Cowboys do when doctors clear Romo to return from the compression fracture in his back?

Jones was asked several different ways and danced and dodged like he never has, refusing to declare Romo the team’s “No. 1 quarterback” as he has in the past.

“We’re going to have a very, very, very good situation to make decisions around and nothing I’d rather do than go into the last half of the season with a ready to go Tony Romo and a winning Dak Prescott, ” Jones said. “I dream of being able to make that decision. We’re not there right now, by the way. We are not there.”

Prescott, who sports a 103.9 passer rating, continues to declare it “Tony’s team.” But the fourth-round pick admits he wants to keep the job.

“It’s competitiveness in me. Everybody wants to be on the field, ” Prescott said. “But as I’ve always said, it’s not my call. This is his team. This is Tony’s team, and I’m here to just help my team win each and every game I can.”

Welcome to the Media and Technology Program…
July 8, 2021