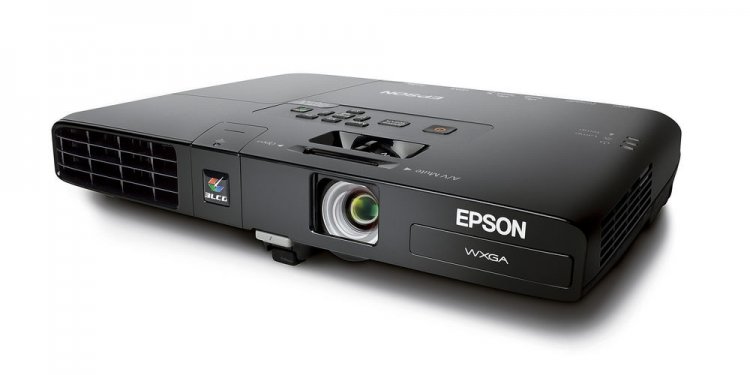 The 1761W has a rated brightness of 2, 600 lumens, and has native WXGA (1, 280 by 800) resolution, compatible with widescreen laptops with a 16:10 aspect ratio. Its light engine employs the 3LCD technology that Epson helped develop.

The 1761W has both zoom and focus wheels behind the lens. The focus wheel was responsive, and I could easily get a sharp image. The projector comes with a soft carrying case, which features several pouches and a messenger strap.

The 1761W has the ports that count for a portable data projector: VGA, HDMI, RCA video, audio in; a type B USB port for keyboard and mouse control; and a type A USB port for running a presentation off a USB thumb drive. It also has a second type A USB port, behind a screw-off cover, specifically for its included wireless LAN module.

Data Testing
I tested the 1761W from about seven feet away, where the image filled our test screen (about 70 inches diagonal). The image was bright enough to tolerate a fair amount of ambient light without degradation, and wasn't notably fainter than the Epson 1776W.

Data image quality, as tested using the DisplayMate suite, was very good for a business projector. Type in our text testing was readable at all sizes, though slightly blurred at the smallest size. The only issue worth mention was a very slight tinting in a few white and gray backgrounds—it was somewhat less apparent than similar tinting with the Epson 1776W, and is unlikely to bother anyone if they even notice it.

Video and Sound
Video quality was above average for a data projector, good enough for video clips of any length as part of a presentation, or even to show movies with. It did very well in capturing detail in dark scenes, but there was a modest loss of detail in some very bright scenes. As an LCD-based projector, it's immune to the distracting rainbow effect frequently seen in DLP projectors.

Audio from the 1-watt speaker is of modest volume, adequate for use in a small to mid-sized classroom or conference room, and sound quality is reasonably good.

Bulb Life
The 1761W has a lamp life of up to 4, 000 hours. That's good for a data projector, although a far cry from the Casio XJ-A246, whose hybrid LED-laser light engine's bulb can last up to 20, 000 hours, essentially the lifetime of the projector. The 1761W, though, offers better data and video image quality (the latter free from the rainbow artifacts seen in the Casio XJ-A246's video), at a much lower price.

The Epson 1761W is a superbly sleek and light data projector, with very good data and video image quality. Data images showed less tinting than those from the Epson 1775W. Though not quite as bright as the Epson 1775W and Epson 1776W, which are rated at 3, 000 lumens, the 1761W's test image stood up to a good amount of ambient light without notable degradation. The 1761W provides Wi-Fi connectivity, though it lacks the 1776W's Quick Connect ad hoc wireless key that facilitates connection. It also makes do with automatic vertical keystone correction, rather than the 1776Ws vertical and horizontal correction plus Auto Screen Fit. But neither of those features is critical, and with the Epson PowerLite 1761W Multimedia Projector you get slightly better image quality and most of the fixings for a much lower price, making it a new Editors' Choice.