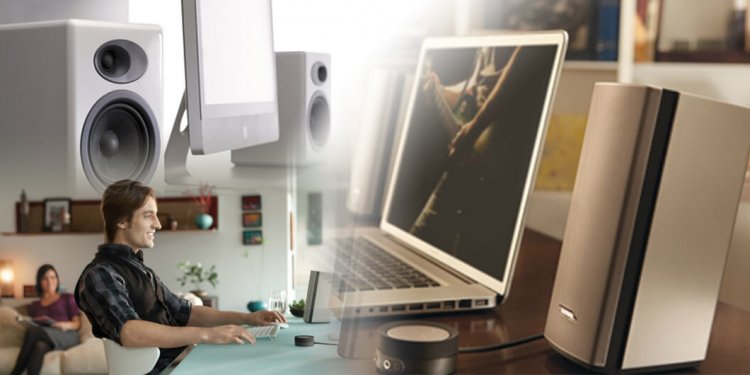 Truly Beautiful Sound Posted by: kcm311 from: Los Angeles, CA on I never write reviews, ever! Until now that is. This is my first one. After doing weeks of research, youtube videos and reading countless reviews by other customers I finally decided that after my final purchase of choice...I needed to share my feelings and hopefully help someone out in the same way I was looking to be helped out. The Bose Companion 5 is by far the best sounding speaker system for your computer in this particular price range. There are systems out there for $100, and some out there for thousands. In my opinion the Companion 5 sounds like a system that if you were walking by a Bose booth and heard the quality and asked, "How much does that cost?" and somebody replied with "$1, 500" you would believe it, and understand it. Whether you could justify parting with that kind of money or not. I have it hooked up to my iMac and it is so incredible. The highs and mids are crisp and clear, and the lows are deep and rich. And believe me, though you couldn't use this system to run a concert...it is plenty loud for an apartment. Or any normal room for that matter. It is truly a remarkable system that I highly recommend to anybody that can spare the $400. Be prepared though, after tax and a possible extended warranty program its much closer to $500. That seems like a lot of money...and really is. But you won't be disappointed in the sound that Bose produces. Not to mention that the system looks great! Very minimal and sleek. A Great design. If you're reading this, then you're at least somewhat interested in this product...GO FOR IT! Thanks!

Simply Wow'd Posted by: Tigerhawk from: West Des Moines, Iowa on So, after about a year and a half of talking myself out of buying these things due to the price, I finally broke down and bought them five days prior to this writing and I've since had these speakers operational for about three days. While I haven't put them through every audio test I can think of just yet, I've tried a few DVDs and a good range of my own mp3 files. Before I installed these, I had a Logitech Z2300 system paired with a SoundBlaster X-Fi card...the second such card in 14 months time; it seems for some reason that my computer is getting a little too anxious about blowing digital decoder chipsets on soundcards, which was another reason I finally talked myself into buying them. Now don't get me wrong, I quite enjoyed the previous setup and stand by my earlier review of the Logitech system. But...wow. I'm absolutely blown away by these things. I've had no problems thus far and am amazed by the range that these do, indeed, seem to have. Maybe it's just my ear, but the lack of mid that some reviewers have had issues with is something I see as it's how a live performance is supposed to sound. Sure, if you want everything PERFECTED, then you probably want something else. But actually, to me, that's the hidden beauty of these speakers: They don't "lie". You'll get great response in some ranges, softer tones in others. Nothing really seems to be overly jacked up; it's the suttle tones that I'm noticing, not the overt blasting of those tones, and to me that just makes the sound more "truthful". I listen to soundtracks a lot, and I love hearing every sound I can out of an orchestra...the more finely recreated the better. I am not ashamed to say that, while listening to the John Williams composition of "Duel of the Fates" from the Star Wars Episode I soundtrack, I was left in tears. Tears. Because it sounded so grandly beautiful to a level I've never felt before. The London Voices' echoes were present where I hadn't heard that much definition on them before, the orchestra was so crisply reproduced that I couldn't help but be completely immersed and lost in the tune. This is the third Bose product that I've owned in my life (the original Acoustic Wave, which I still have and is still going strong almost 20 years later and, more recently, the Over The Ear headphones), and I am continually amazed as how great Bose sound is. Yes, of course they're very likely overpriced, but quite simply I am not at all regretful of shelling out the extra money for any of these three products, period. By the way, the owners manual says that you should only have them 24" apart for optimum sound quality. I have dual widescreen monitors and this doesn't seem to have any negative consequences in having them further apart. Very highly recommended, with the only lower-than-5-Star rating going towards price because, as another reviewer said, these are definitely a pocket monster. Otherwise, I have nothing but praise for them and unless they somehow short out (and even at max volume they handle the sound brilliantly) these things will never see the inside of a Best Buy store again.

Truly Amazing Posted by: EmacSTL from: St. Louis, MO on I'll admit, I was a little apprehensive before purchasing. I did the research and read the reviews. I decided to check 'em out, because I've always had this curiosity about Bose products. The price would repel me every time I built up enough nerve to buy. But I bought them and I am impressed. The set up was easy, they look great and sound even better. My home office sounds like a recording studio. I'm hearing details that I've never heard in songs, and I'm an Apple fan, and they look really nice with my iMac. It's like buying a luxury car. Most cars will get you from point A to point B, but a Benz or Cadillac will get you there in style. Love 'em!! Do recommend, and this is from a frugal consumer.

The quintessential control knob for all…
June 18, 2022

What is a Multimedia Designer? Multimedia…
June 6, 2022